Diary of a Cannabis Growing Preacher Weeks 11-13: Clones and Lights

Back in the saddle and here we are again… For those of you who were concerned, I have recovered about 90% from my ladder incident and life is getting back to normal. That is, if you consider the coldest weeks of winter normal! I have the clones in their new home and the new light grid is looking good. There’s a lot to see, so let’s pick up where we left off. 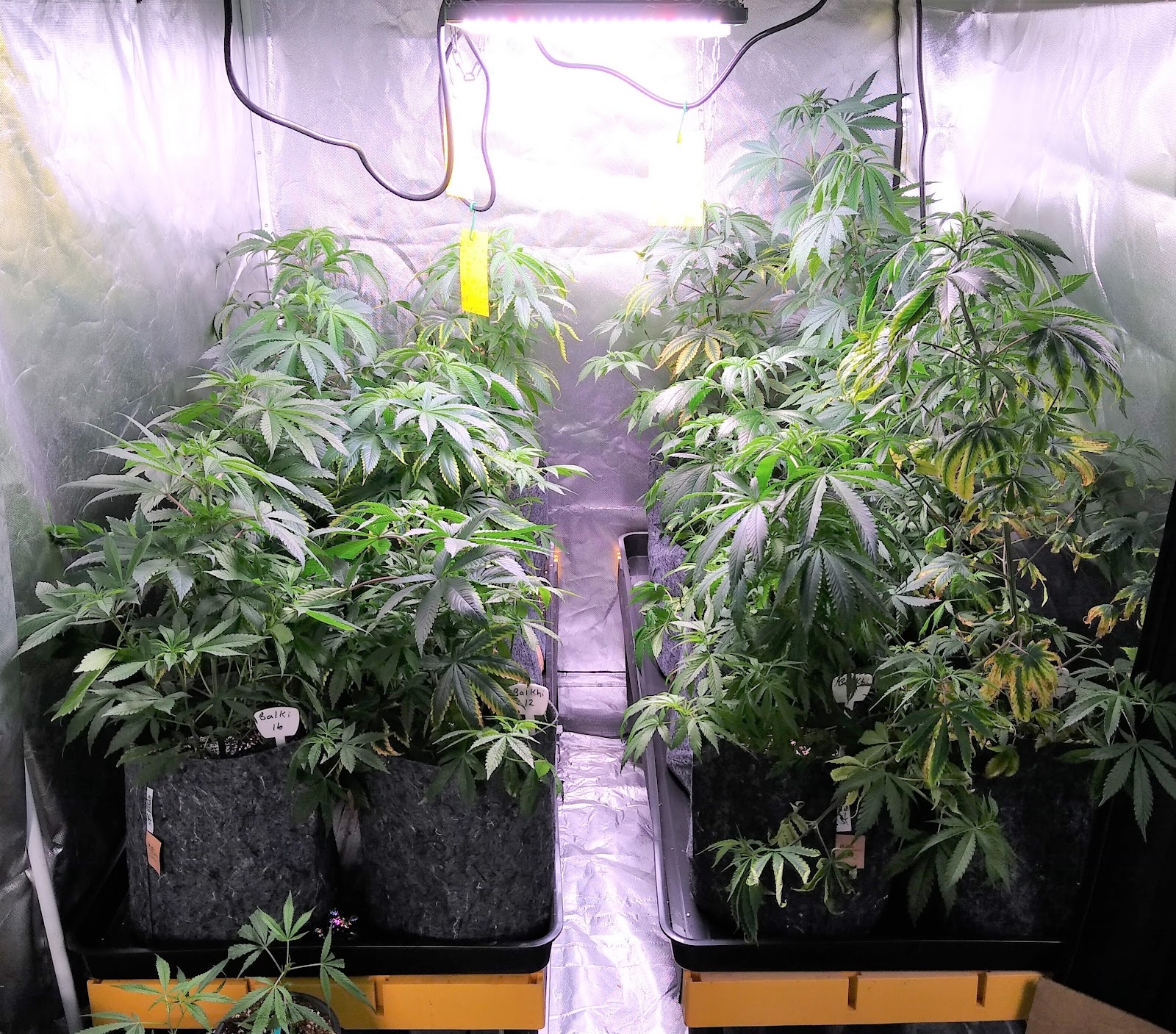 Here’s where the Balkhi plants were at the end of week ten. As you might be able to see, there are five plants that are showing male pattern stretch. The branches are spindly, there is a lot of node spacing, and the foliage is sparse. As you know, females tend to be heavier in appearance with thicker leaves and shorter growth. I can tell that these lights are functioning beyond expectations since there is little, to no stretch, in the majority of the plants.

When we left off, the Balkhi had just been replanted and were getting their roots wet in the new 3-gallon air-pots. I gave them a few days to get dialled in in their new home and worked on getting the nutrients figured out.

I started the Nectar For The Gods on their third day, but it was a very heavy mix and I foresaw issues with using it as a hydroponic style feeding solution. So, I went back to the much lighter Earth Juice Sea Blast mix. The plants reacted to the initial feeding of the NFTG solution in a way that worried me. Some level of shock is not uncommon with
nutrient changes but I was not willing to wait out the recovery. I have too much time in this bunch to risk them, so I just did a light flush and fed them all their familiar Sea Blast, and they looked happy again.

The new lights are the one thing that is really shining through in all these little issues. I noticed, when I looked over the last article, that one of my light photos didn’t get included. I must be getting old to have left it out, so here is another look. I only wish I had used this board as a template for another grid before installing the lights.

Since I am using this light in one of my smaller 4ft x 4ft tents, I wanted to maximise the spread of the light canopy to reduce shadowing and hotspots. The four outer lights are Spider Farmer’s SF1000 LED Grow Lights, They are the smallest of the series but four of them are equivalent to one of the larger four-panel lights. It cost a little more to do
it this way but it is worth it.

Feel free to use my discount link if you wish to get your own SF LED’s.
https://www.spider-farmer.com/discount/JOHNNYTHCEEDS

I also added a light from Carambola: their Full Red FR Spectrum, 660nm w/UV Quantum Board that I hope will elevate flowering. I figured it probably wouldn’t hurt and there was space for it in the centre of the grid. 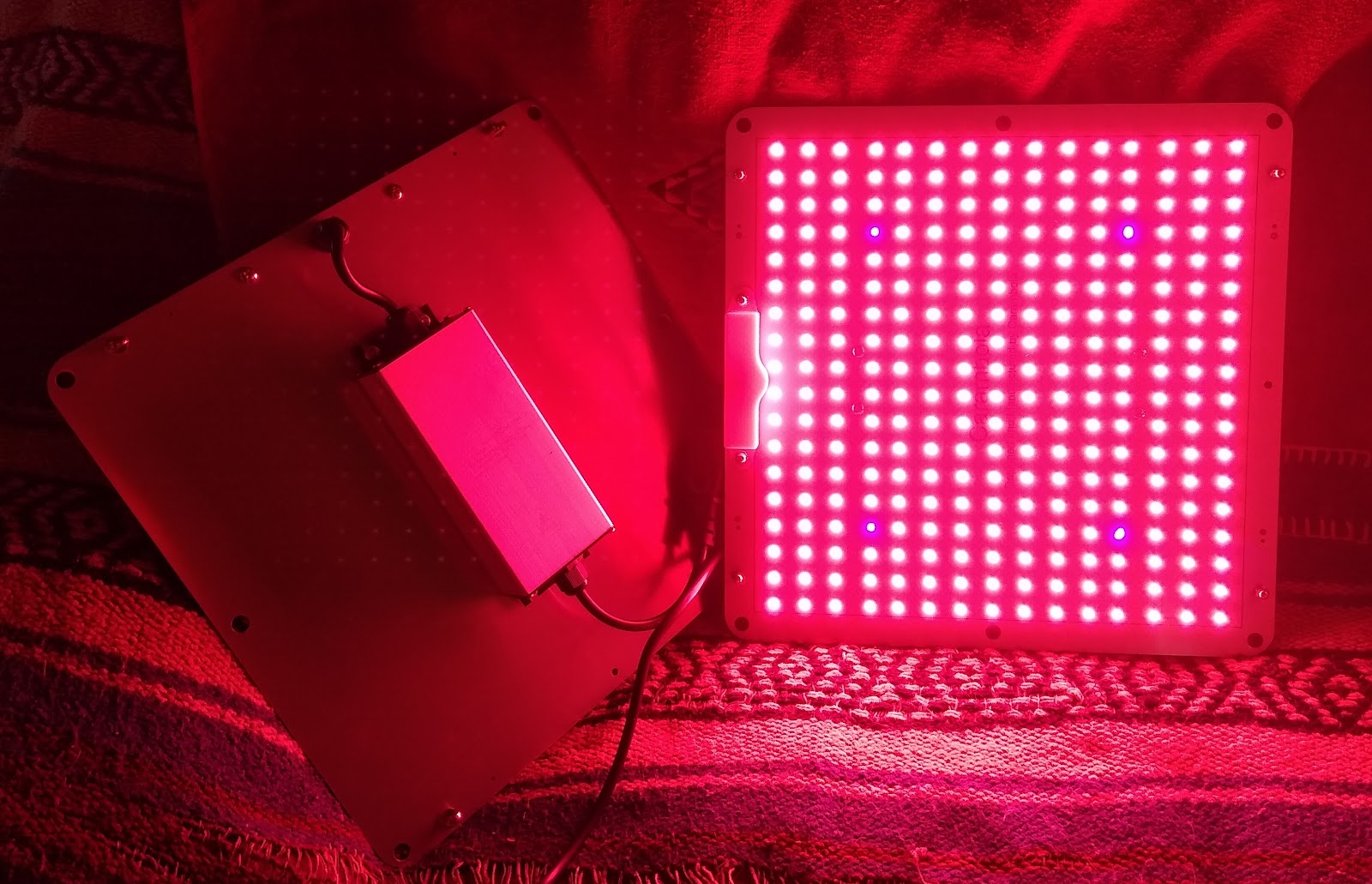 All together these five boards run at around 500 watts. If I can find my wattmeter I will check that to see what they are really pulling. The SF boards are adjustable and linked, so I run them at about 90% to extend their life. Here is a shot of how they look in action. I did lower the power to make the photo work better. They are just too bright for a clear photo. 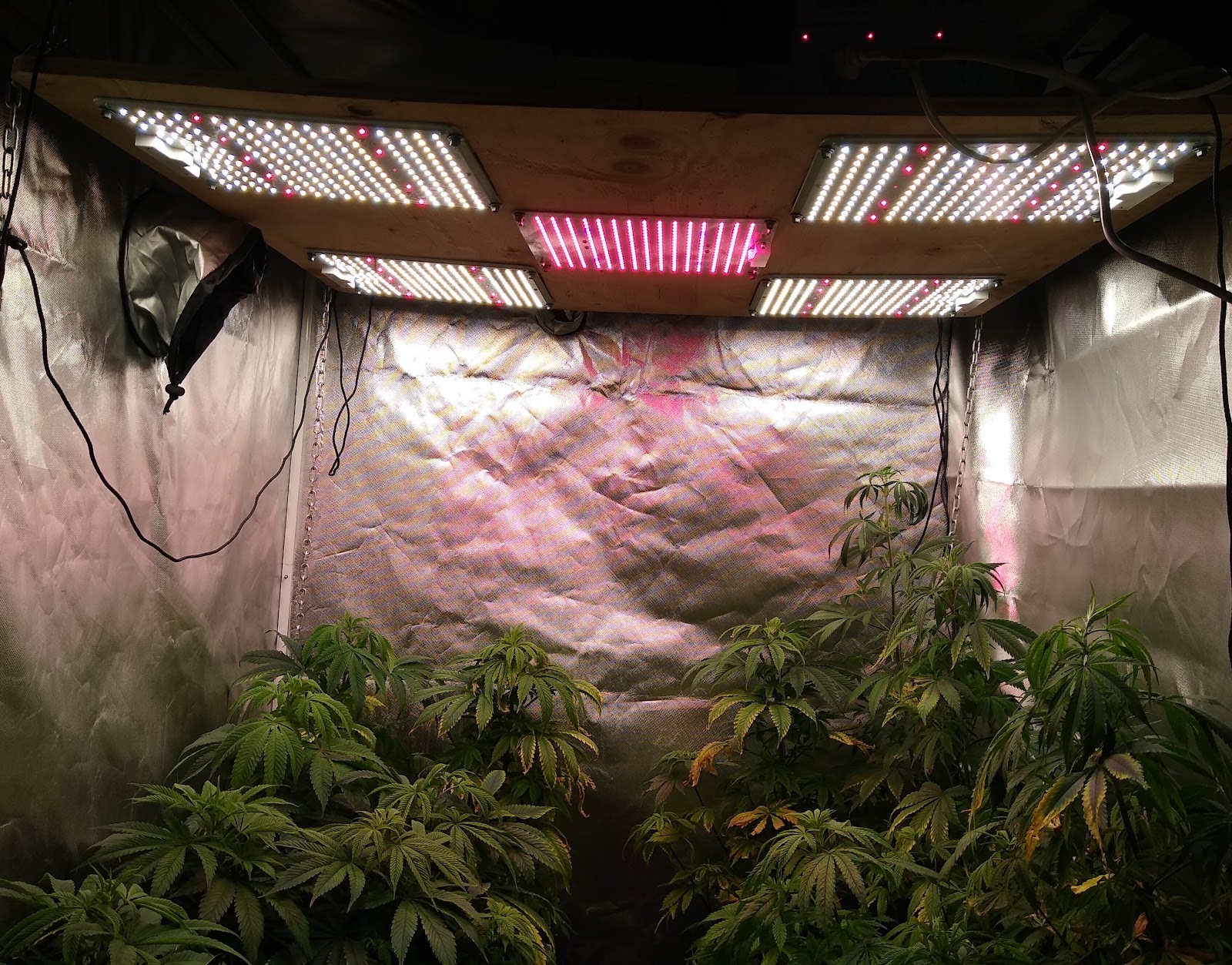 If I were running larger pots in a bigger space, I can easily see these lights producing the manufacturers claimed 2.5 grams/watt. Do the maths…1250 grams from 500 watts. We will see what these less than optimal conditions produce. I think I will foil the board to help a little with reflecting the light.

I am also looking to make one more enhancement by adding some 730nm Infrared lamps into the mix. There are a few IR chips in the SF panels but they serve a different purpose. I ran across some articles over the years that made claims about the ability of the 730nm wavelength boosting flower/fruit production by up to 30%. It does this by inducing plant sleep. It also boosts hash-type resin production, so that’s a plus too.
Sleeping Beauty!

This is the principle: under typical light conditions, it takes the plants around two hours to fall asleep after powering off the light cycle produced by HID or other bright light sources. In nature, our sunset is full of the red and infrared spectrums. It is these reds that signal to the plants that it is time to sleep. This is absent in the typical indoor garden and data indicates that this results in the plants taking about two hours to
shift into their sleep routine.

By operating the 730nm wavelength for about 15-20 minutes after the main lights go off, it induces the plants into their sleep cycle. Evidently the sleep period plays a large role in plant growth. By adding the extra two hours back into the sleep period, it
is supposed to increase the flower production up to 30%.

I have a 3 channel timer that will make this idea work like it should. Here is an example of one of the 730nm lights I will try. 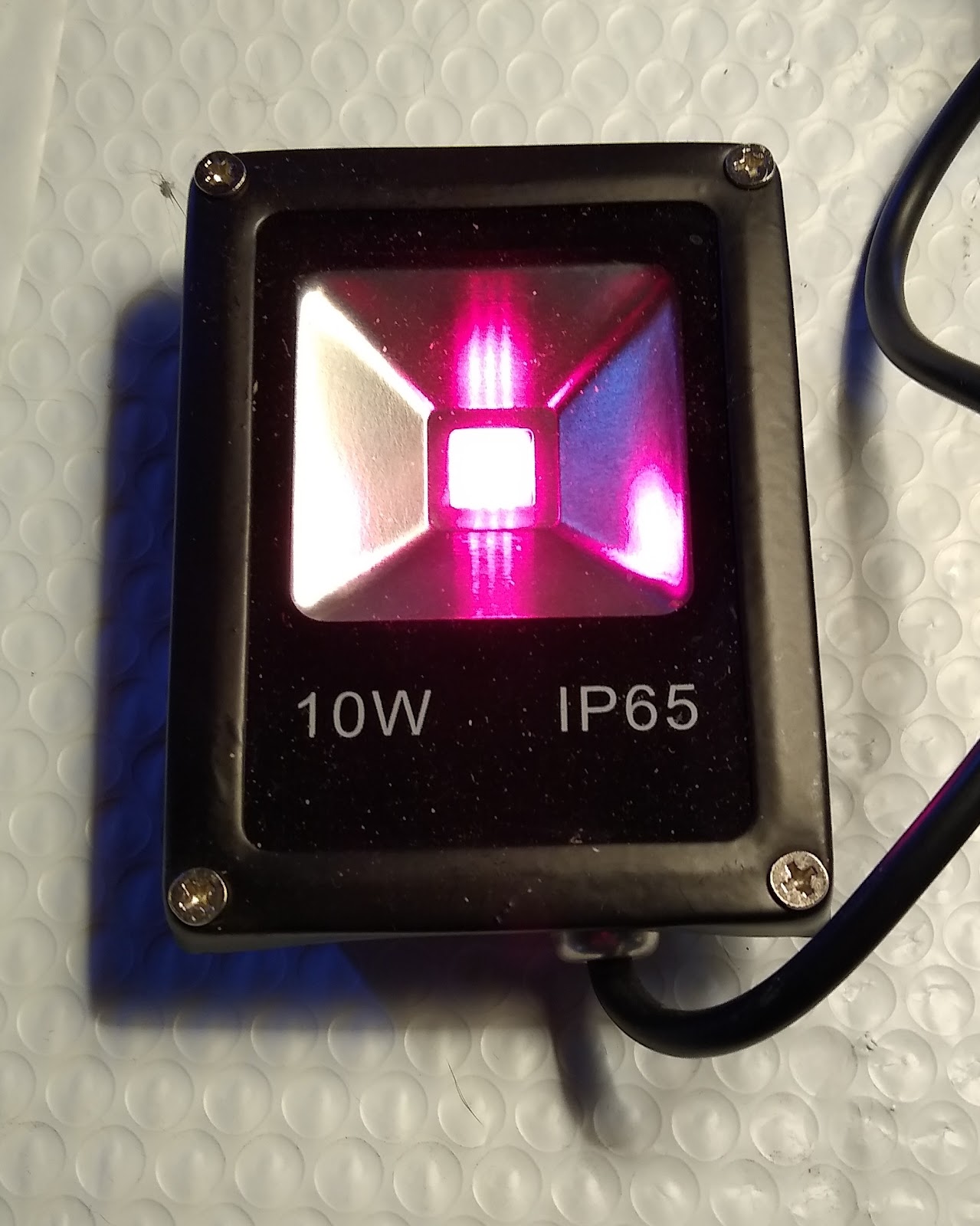 I had to replace this lamp’s regular COB chip with a 730nm COB chip. I am hoping 10 watts per lamp, with possibly one lamp in each
open slot, will do the trick. These chips get exponentially more expensive as wattage increases. I am also working on a few other designs and I will share those when I get them put together. This one cost about $20 to put together.

At our last encounter with the cloning trays, I had just finished the cloning tray and it was yet to be filled. I know that the way my tray looks will be a shocker to some but I assure you it will be thinned out a little over time, if needed. It looks nothing like one of my normal methods, as you see here. This tray has rockwool cubes, the other method I prefer is Root Riot cubes. 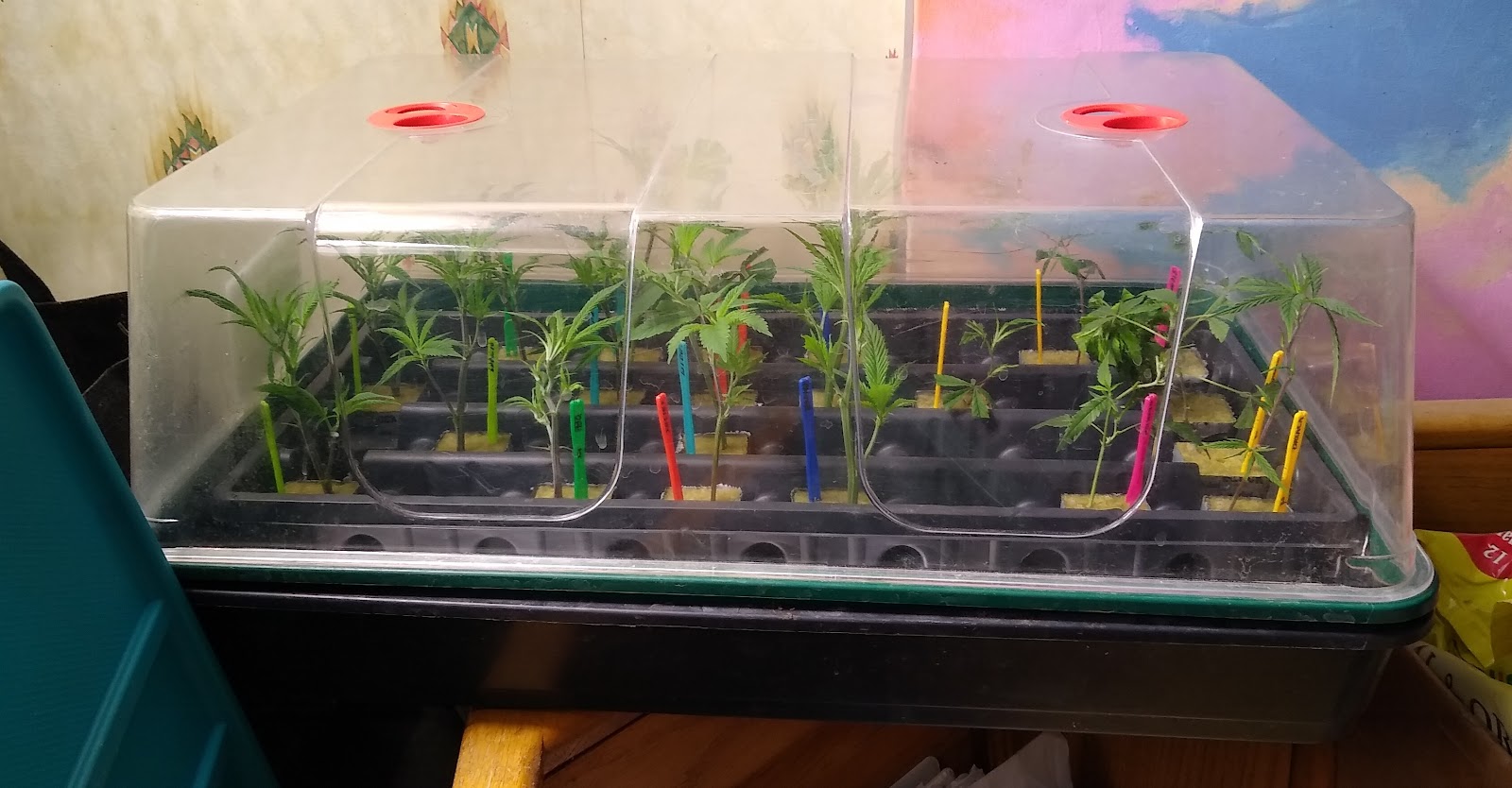 The new tray is able to do multiple clones in the same amount of space as one prepared in a rooting cube. It also allows a good view of the roots. I also like the way the lid lock provides a prop for an air vent gap in the new design without cutting holes into the tub being used as the humidity dome. 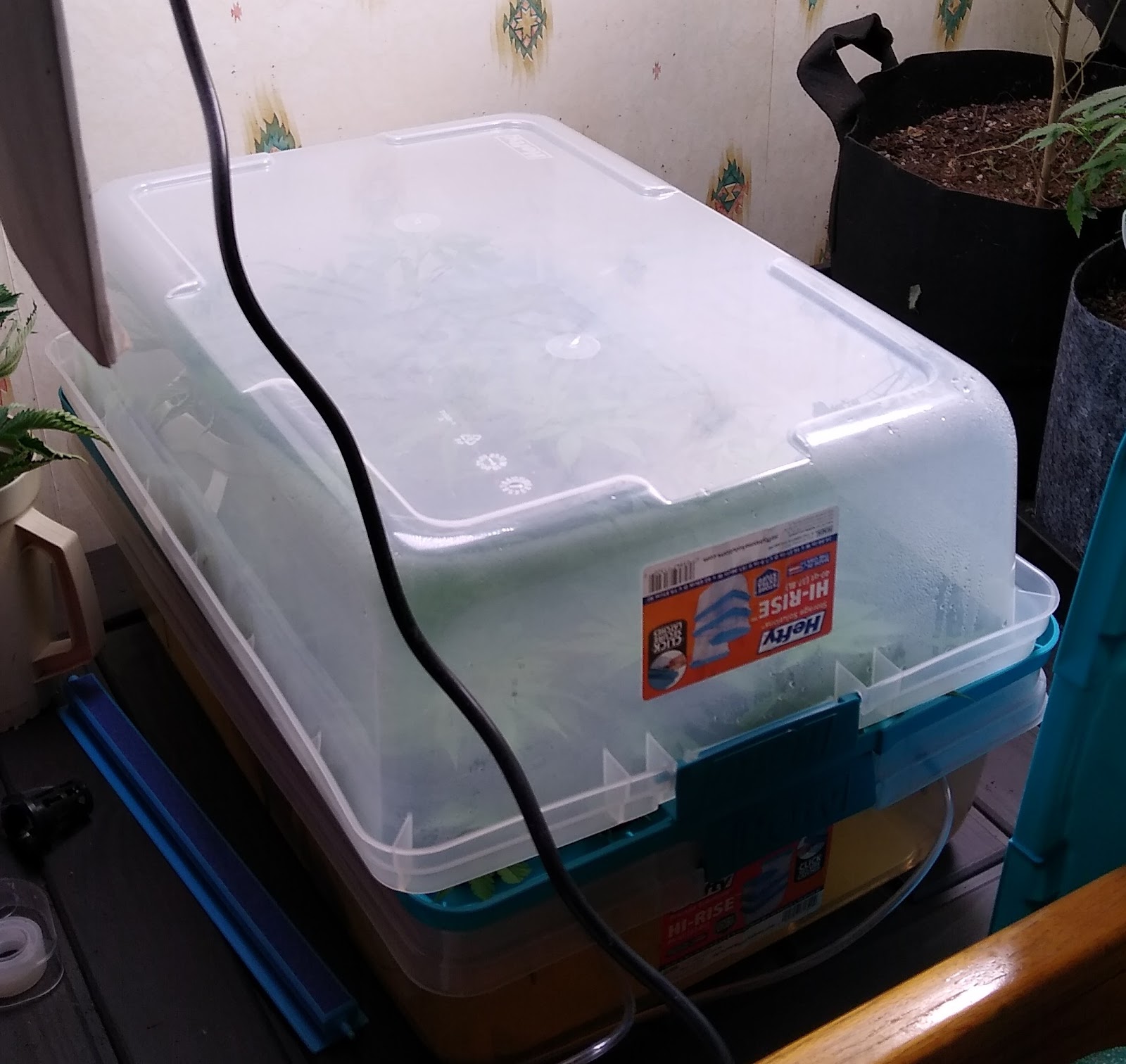 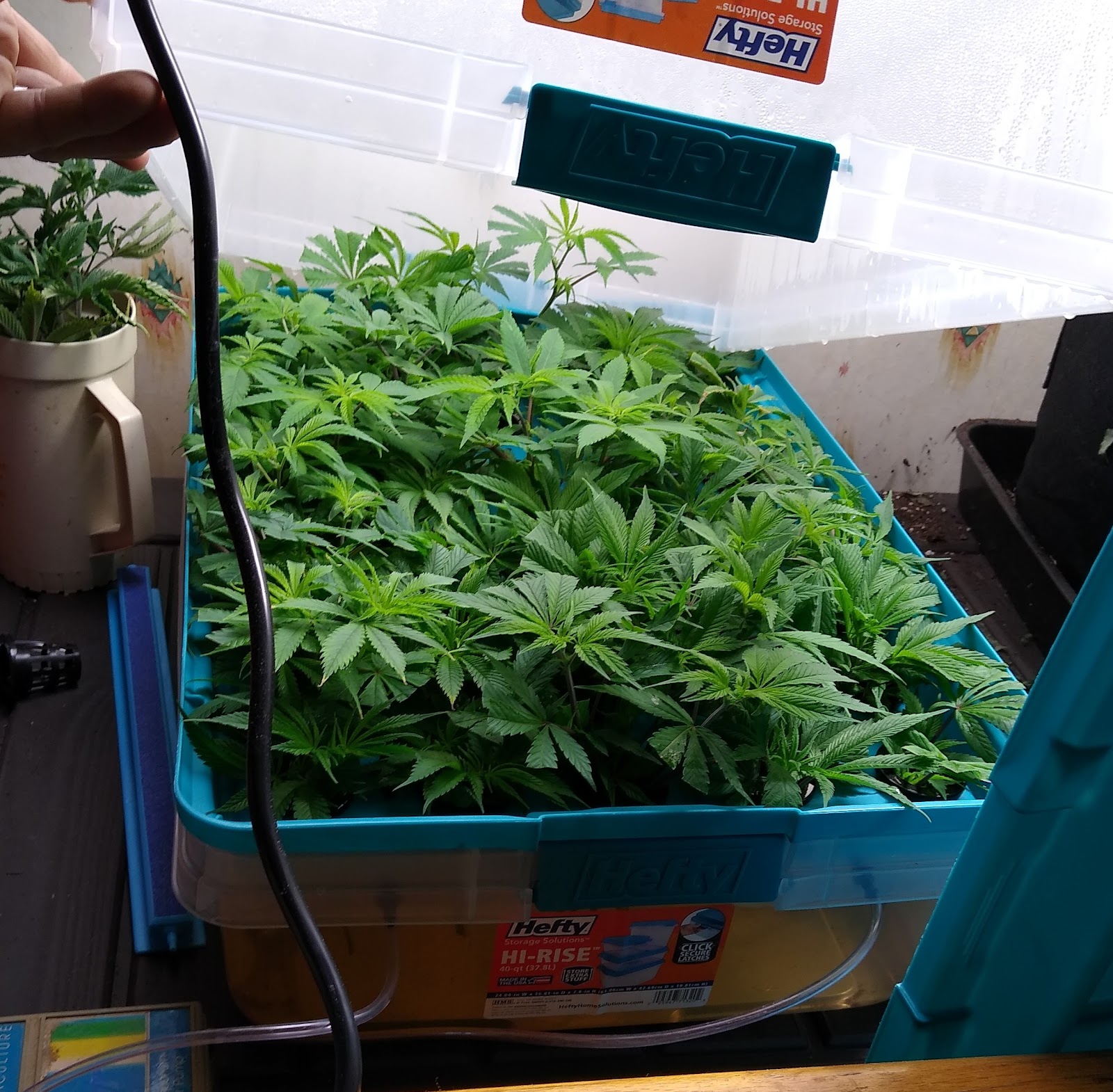 As you can see, I only did a minimal trimming of the larger leaves with this setup. They are doing very well in this mini bio-dome environment. I will keep a close eye out for infection. This is the main advantage of this type of system. The plants can support much larger leaves than rooting cubes or rockwool cubes. I find that the less leaves
left on those cuttings the better. However, I suffer a higher rate of loss with root cubes because of the necessity to trim the leaves so heavily ( although I am aware of the arguments on both sides of this method). With the bubbler tray, much larger leaves are required to keep the cutting from falling through the hole. By keeping the pH balanced, the plants have ample food and water to support the larger leaves. Also, each hole can support multiple cuttings.

I took a few extras from most of the plants to cover losses and to give away to buddies. Plants that peak my interest will be farmed out to friends who will push them to their potential. I look forward to seeing what these plants can do under better
conditions.

In my first article, ‘Confessions of a Cannabis Growing Preacher’, you will find an introduction to the story of #3. I spent years on a quest to find another plant like her. She is like the Holy Grail to me and my old buddies. Most of them still recollect losing entire days to her effects. She was truly a one-hit wonder. The first time one of my old friends tried her, he insisted on a second hit, despite my warning. He only lived a short ten minute walk from me but it took him four hours to get home that day. As he
retold his adventure to me the next day, apparently he kept forgetting where he was and where he was going. He often found himself just sitting on the ground exploring his environment. Nothing we have ever grown since her delivered anything even close to her legacy.

I bring her up now because we are delving into the part of the world she originated from. I am fairly certain that she originated in either Afghanistan or Pakistan. When I was taking cuttings, two of the girls really stood out. Both appear to be the same phenotype and both have already given first signs of being females. The first one I found in pot #?… you guessed it… #3. The second is #15. 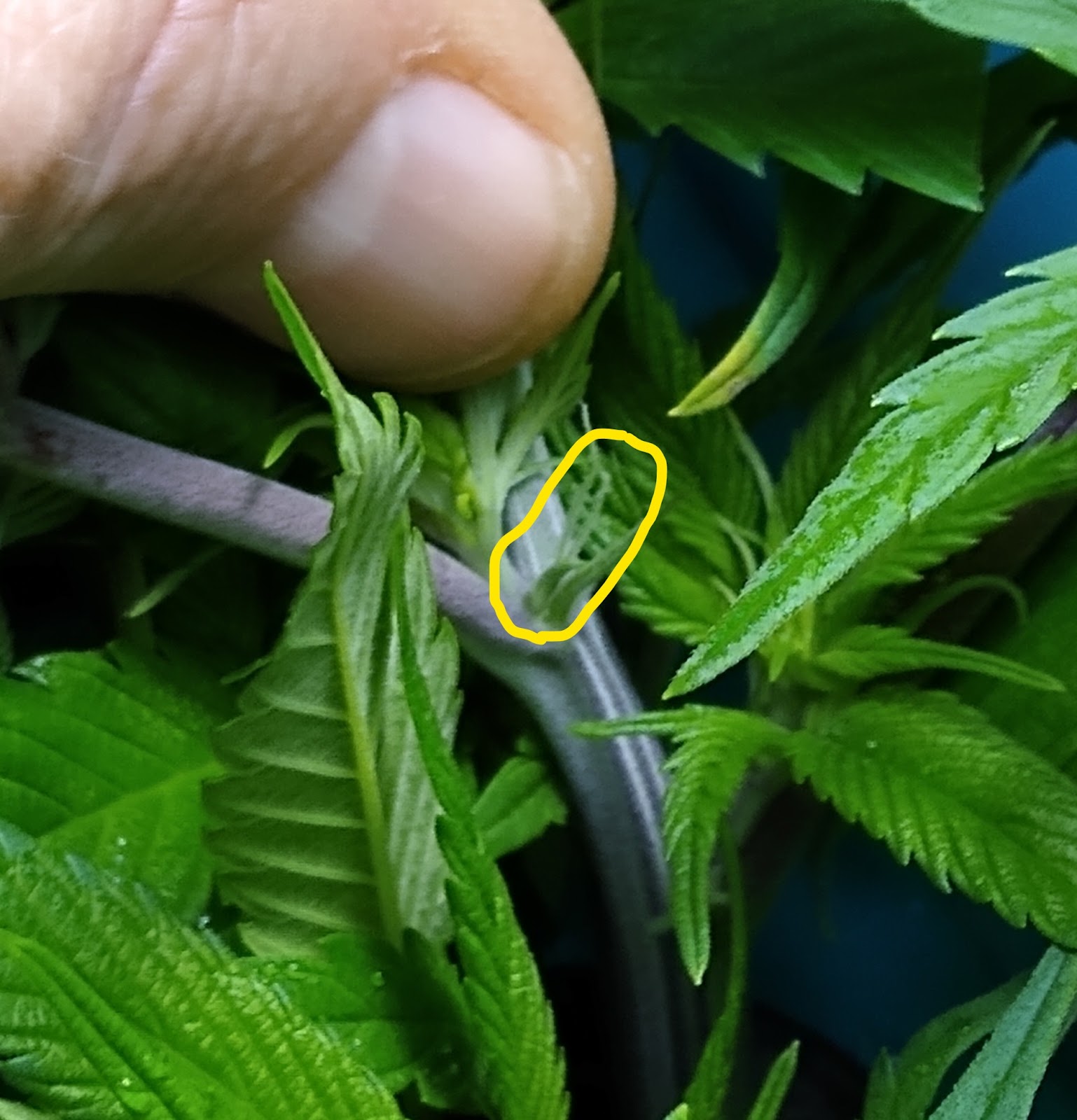 The female pistils are barely visible in the photo, so I circled this one to help you see it. It is still tough to see but it is there. These two girls are the only ones showing sex so far. It is a little obvious that some are growing in the lanky male pattern, but none of the others have officially sexed yet.

Since taking cuttings, the plants have really filled in the gaps. This is how everything looked after the cuttings were taken. 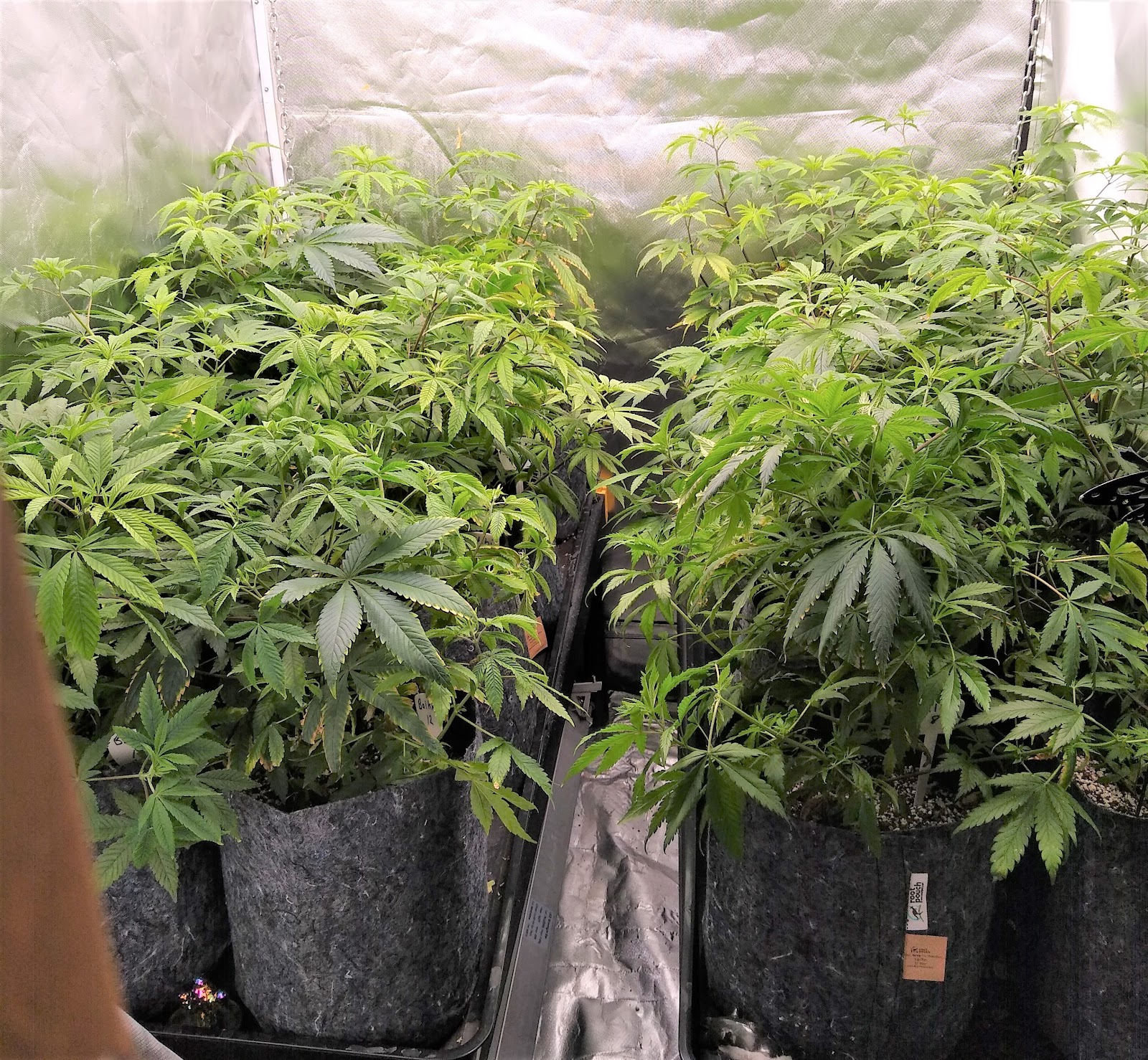 It has been a couple of weeks but the garden has really taken off. I removed the majority of the potassium deficient leaves, so the lighter leaves are from shading and new growth.

Where we are today 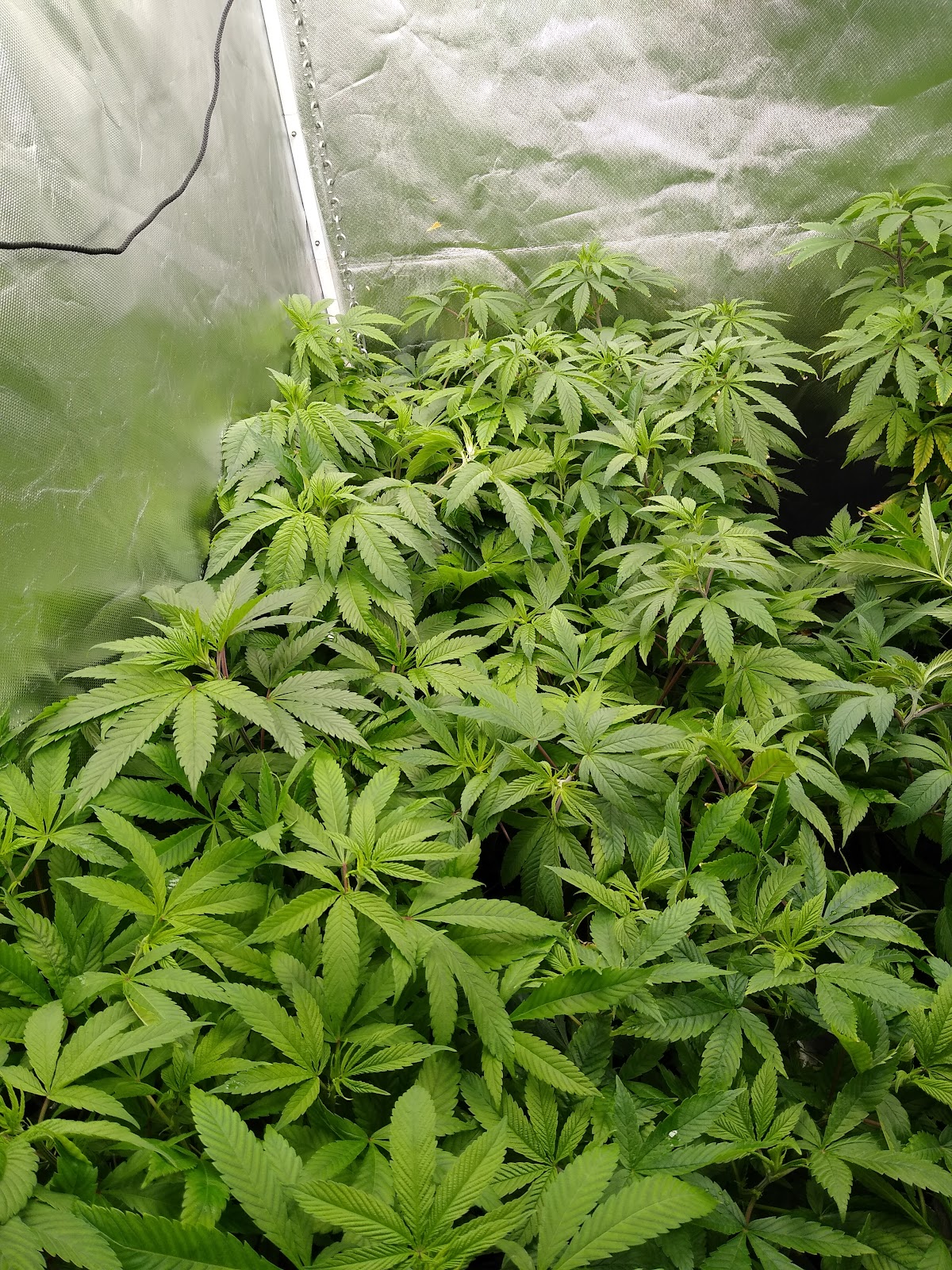 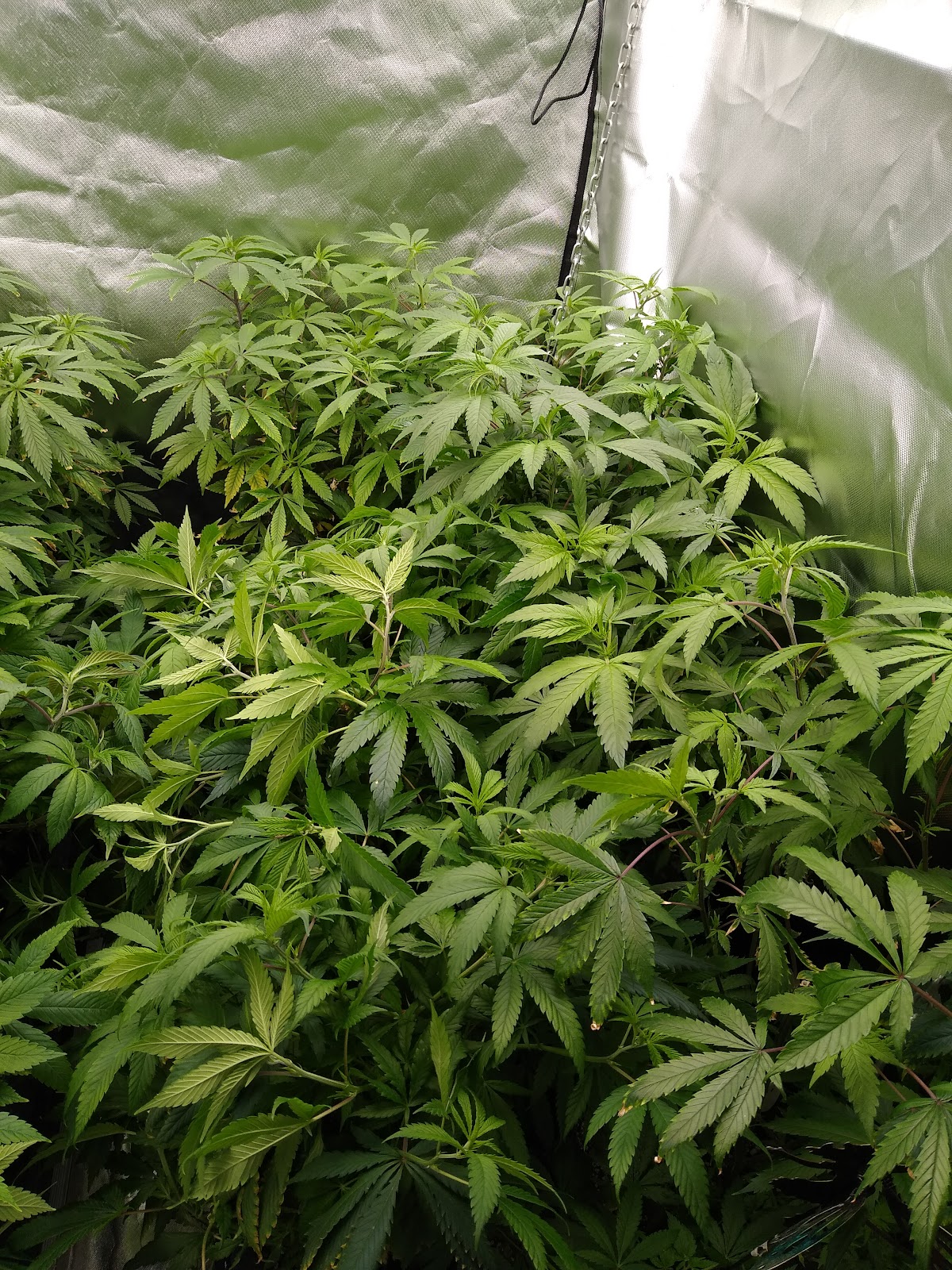 It is rapidly becoming obvious that this garden may need some additional room. I will have to consider this once we see how heavy this jungle gets in the next week or two. We still have about six more weeks of hard winter so moving to an out-building may not be an option. I will explore some options and see what happens. It may be time to see how difficult it is to assemble a massive 8ft x 8ft tent in a 10ft x 10ft room!

Cultivation information, and media is given for those of our clients who live in countries where cannabis cultivation is decriminalised or legal, or to those that operate within a licensed model. We encourage all readers to be aware of their local laws and to ensure they do not break them.

Johnny THCeeds started growing cannabis in 1990 to help his wife who suffered from debilitating epilepsy. Circumstances lead Johnny into Christian ministry in 1995 and he now preaches in a small mountain community church. Because of his faith, he ceased growing until 2008 and 420, when he obtained a medical license to grow because of injuries. He has become an advocate for Landraces and their preservation, after discovering that hybrids increased his symptoms of PTSD, like paranoia and panic attacks.

How To Stop Cannabis Plants From Falling Over

Of all the things that can go wrong when growing weed, cannabis plants falling over has got to be up there with one of the most devastating. Fortunately, plants are designed to stay upright. So, catastrophe is easily...

How to Grow Cannabis Indoors: A Step-by-Step Guide

Growing cannabis indoors is becoming a pastime for many green-fingered aficionados. The reasons are varied. With the increased interest and experimentation in house plant cultivation, it was inevitable that people would...

The Importance of Saving Your Cannabis Seeds

The cannabis seeds sold by today’s top seed banks are, on the whole, genetically stable. And well adapted to many growing conditions. Yet as the global environment continues to change at an unprecedented rate, it’s...